Home › News & Downloads › An increase in Probate fees: to be, or not to be?

An increase in Probate fees: to be, or not to be?

That is the question.

February 2017 saw the Government announce that there would be a dramatic rise in the cost of obtaining a Grant of Representation (more commonly known as a Grant of Probate) taking effect from a date to be confirmed in May 2017. For those that aren’t aware, a Grant is required after death in many estates to enable the Executors to sell or transfer assets and is almost always required where there is a property, bank accounts, shares or other investments to be dealt with.

At that time we were advised that, despite overwhelming opposition during the consultation process to an increase, the current flat rate fee of £155 when obtaining a Grant for a client was to be replaced by a banded structure. Fees would be then be set based solely on the value of the estate.

In the highest value estates, the increase in fees would be a huge 13,000%! Quite an increase in charges when the work involved for the Probate Registry is entirely the same, irrespective of whether the estate is of a high or a low value.

The proposed new scale for fees was as follows: 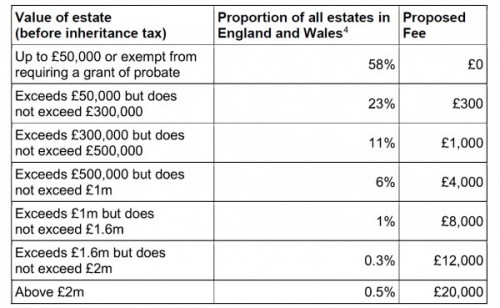 As you can imagine, with the deadline of an increased Probate fee looming in May, it became hugelly important for us at Leonard Gray to prioritise Probate applications to ensure, where possible, that clients’ applications did not fall foul of the increase.

It was Theresa May calling for a General Election to take place on the 8th June which resulted in a lack of time for Parliamentary approval of the increase. So, on 21st April, just two days shy of National Shakespeare Day, we awoke to find out that Probate fees would no longer be increased. To quote The Bard himself, “better three hours too soon than a minute too late”.

Some may see it as poetic justice that what would have effectively been a stealth death tax had to be pulled so that we may have a stronger Government lead us through the Brexit negotiations. It does, however, remain to be seen whether this controversial increase will re-emerge after the General Election.

But, for now, it would seem that it is a case of all’s well that ends well.

Chris is an experienced, friendly and professional Solicitor with our "Wills, Probate, Later Years" team. Chris is partner of Leonard Gray and a member of the Society of Trust and Estate Practitioners (STEP), which is the leading professional body for practitioners in the fields of trusts and estates. He is also a Trustee/Director of Age UK Essex and a Dementia Friend.

This website uses cookies to improve your experience while you navigate through the website. Out of these, the cookies that are categorized as necessary are stored on your browser as they are essential for the working of basic functionalities of the website. We also use third-party cookies that help us analyze and understand how you use this website. These cookies will be stored in your browser only with your consent. You also have the option to opt-out of these cookies. But opting out of some of these cookies may affect your browsing experience.
Necessary Always Enabled
Necessary cookies are absolutely essential for the website to function properly. This category only includes cookies that ensures basic functionalities and security features of the website. These cookies do not store any personal information.
Non-necessary
Any cookies that may not be particularly necessary for the website to function and is used specifically to collect user personal data via analytics, ads, other embedded contents are termed as non-necessary cookies. It is mandatory to procure user consent prior to running these cookies on your website.
SAVE & ACCEPT